Now that tax season is upon us, many of you have probably been hearing from your financial planner or CPA that there are revisions and/or implications to your retirement plans and taxes due to the SECURE Act that was passed by the Senate and signed into law at the end of last year. The Setting Every Community Up for Retirement Enhancement Act of 2019 includes significant provisions aimed at increasing access to tax-advantaged accounts and preventing older Americans from outliving their assets.

The new act allows millions of small business and their workers to now have a new opportunity for a more secure retirement. With 28 million small businesses making up 99.7% of all U.S. firms, small businesses are big business for the country’s economy. But what defines a small business? The size standards are not a one-size-fits-all type of mold. Instead, it depends on the kind of industry you are in. Surprisingly, small businesses with fewer than 20 employees make up 89.6% of all U.S. business enterprises. And on top of that, 23 million businesses in the United States actually have no employees at all—meaning only the business owner will operate in a holistic capacity.

As of 2018, there were 60.9 working dentists per 100,000 people in the country (ratios vary by state) with an estimated 200,000 working dentists, according to the American Dental Association. Dentists are more likely to work as an independent business than other medical professionals. Nationally, about 47% of physicians owned their own practice in 2016, according to a Physician Practice Benchmark study, which used American Medical Association data. About 77% of all dentists owned their own practice in 2017, according to the ADA.

Why This is Important

As mentioned in one of my previous articles, there is a retirement crisis in this country. According to the U.S. Global Investors survey, 65% of Americans have little or nothing saved for retirement. The number one reason why Americans aren’t saving is that they have too many other expenses. The SECURE Act aims to encourage employers who have previously shied away from these plans, which can be expensive and difficult to administer, to start offering them. A key motivation for promoting employer-sponsored retirement savings plans is that those who use them typically save considerably more than those who rely upon individual savings plans such as IRAs.

Let’s remember a few important reasons why you should offer a retirement plan: 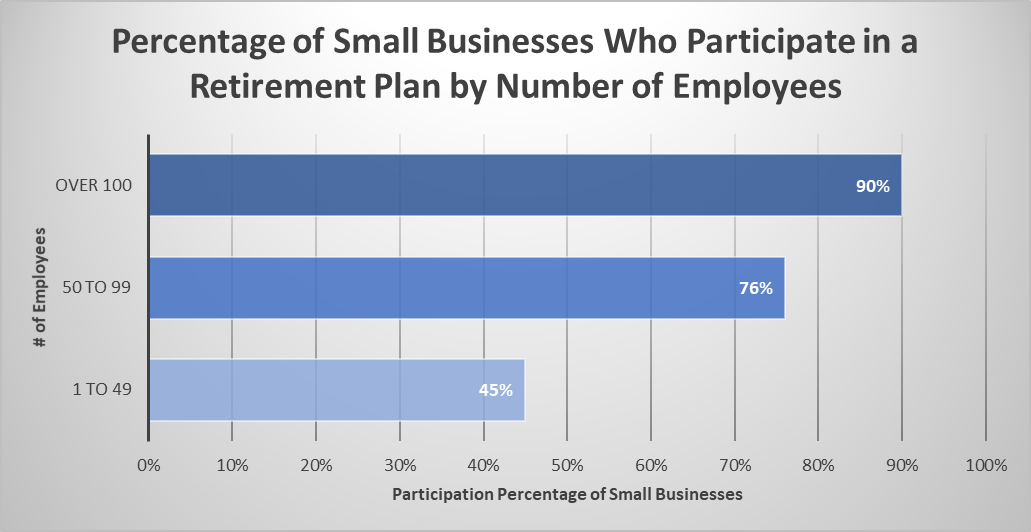 With the passage of the SECURE Act, there is a pathway to mend the retirement crisis and help workers of all ages save for their future.

There are several major provisions to note that can impact small businesses sponsoring 401(k) plans or SIMPLE IRA plans:

Additional significant components to consider from the SECURE Act, but not all the take-aways within the legislation, that are beneficial to small businesses or individuals saving for retirement are:

There are many advantages the SECURE Act can provide in the coming years. Speaking with your advisor and CPA to find out all the details of the regulations can be key for augmenting your retirement strategy. And whatever the motivation might be, the new provisions are sure to enhance retirement security by expanding your own retirement savings, simplifying plan administration for small business owners, and refining the industry rules.

This article was originally published in the North Carolina Dental Society’s Gazette.

Check the background of this firm/advisor on FINRA’s BrokerCheck.